When two 1-pound, 2-inch diameter, chrome steel spheres are smashed together, enough heat is generated at the point of contact to burn a hole in ordinary paper!  This dramatic demonstration has been a favorite of students in every grade for as long as I have been teaching!

There are a few considerations when allowing students (especially younger ones) to conduct this activity on their own…  First, the spheres are pretty heavy, so if they were either dropped on a foot or onto a nice tile floor, the result would not be good.  Also, be sure that the only thing between the spheres is paper or aluminum foil.  Fingers caught between the colliding spheres would not  be happy.  Finally, all participants should wear safety glasses, as it is not unusual for a small piece of paper to fly off after the spheres collide.

The Procedure for Smashing Steel Spheres: 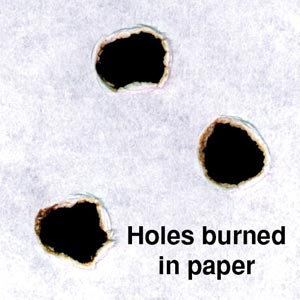 Have an assistant hold the top edge of a piece of regular white paper vertically.  Hold one sphere in each hand on either side of the paper.  Quickly move the spheres together until they collide against the paper.  If they do not burn a hole in the paper the first time, try again and move the spheres together more quickly.  Examine the hole in the paper.  You will see that the areas around the edges of the hole are actually singed, and you will smell the burning paper! 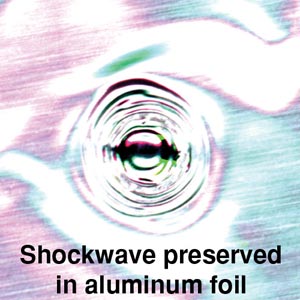 Repeat the activity; however, this time use aluminum foil in place of the paper.  You will observe concentric circles radiating outward from the impact point.  This is a clear way to visualize shock waves!

This demonstration graphically illustrates how kinetic energy is transformed to heat energy.  Though some sound energy is produced, the force centered at the small where the spheres collide generates enough heat energy to burn the paper.  According to Newton, F=MA.  The amount of force between the two spheres is a function of the mass (which is constant) and the acceleration (which is controlled by the person moving the steel spheres).  The faster one smashes the spheres together, the greater the force.

A note from Ron Perkins:

Some time around 1996, the Smashing Steel Spheres demonstration was presented to a group of teachers in Dr. Larry Peck’s, AP summer program at Texas A&M, taught by Kristen Jones and Lisa McCaw.  One enterprising teacher tried the demonstration later that evening with some old spheres that he had around the house.  Imagine his surprise when he obtained sparks after colliding the rusty spheres together with a piece of aluminum foil held in between.  He had rediscovered the thermite reaction: Fe3O4 + Al -> Fe + Al2O3 + Heat and Sparks.

Since then, there has been a frantic search for rusty spheres.  It is possible to rust the Educational Innovations’ spheres, but it is usually a very slow process.  Dr. David Shaw, MATC in Madison, Wisconsin, has reported that a few months in the presence of fumes from the chemical storage closet works well…

This entry was posted on Sunday, June 13th, 2010 at 2:47 pm and is filed under College level, Elementary level, energy, experiments, High School level, Middle School level, Physics. You can follow any responses to this entry through the RSS 2.0 feed. You can leave a response, or trackback from your own site.