Ahhh, Eddy Current Tubes – you would never think that a hunk of copper pipe and a magnet could make anyone grin from ear to ear. I just love these things.

So simple in appearance, and yet so magical to see and use. Whenever I happen to have a set at home, I soon lose control of them to my wife who is just as fascinated by them as I am.

Although they can be used in fairly high end physics demonstrations, they are stunning enough that everyone who has a chance to see them is simply amazed.

Just realized – you may not have not seen one, have you? Here’s a video for you:

Kinda cool, huh? So, since I have (hopefully) gotten you to say “wow,” I’ll just bet you are wondering “why” — here’s some science:

What the heck is an Eddy Current anyhow?

Lenz’s Law says that a magnet passing through a coil will generate an electromagnetic field. That’s how generators work. An Eddy Current Tube is a special circumstance of Lenz’s Law (after all, a tube is not a coil). As the magnet passes through the tube it creates the expected electromagnetic field, but in this case, it is toroidal (looks like a doughnut) which is rotating. Now, this is the part that seems really counterintuitive – THAT field interacts with the magnetic field of the permanent magnet (that created the toroidal field in the first place!). 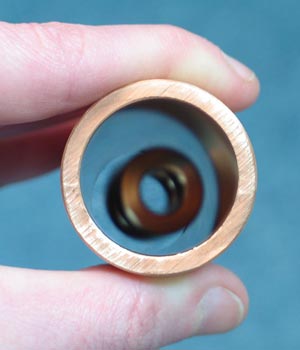 Here is a quote from the Educational Innovations’ write up for the product if you are REALLY interested in the geek speak:

Ok – I should point out that the amount of heat we are talking about is negligible. You are not going to be measuring it with anything you have sitting around in most labs.

Four major factors affect how fast that magnet passes through the tube. In no particular order:

You can trade off these different factors, and still get stunning results. That is one reason we are able to provide smaller diameter ring magnets with the tubes – those thick walls more than make up for the smaller size of the magnet. The smaller magnet also gives you an advantage – you can see “daylight all the way around” – students cannot claim that the magnet is dragging along the inside of the tube – it is completely suspended in midair – Ooooo! Anti-gravity!

So – let’s mess with a variable – how about we get an ALUMINUM tube – same diameter, same wall thickness as the copper one. Drop the same magnet down both of them, and it will travel nearly twice as fast through the aluminum tube. That is why we sell an 8” copper and a 15” Aluminum – the time for any magnet to pass through one is the same as the other (in the case of our pair, it takes about 2.5 seconds for the rings to pass through either tube). It makes for a very graphic demonstration of the difference in the conductivity of the two materials.

If we use a larger, more powerful magnet (like our M-165 disk magnets) the drop time is even longer – they fit rather tightly, AND they have a lot more magnetic force than the ring magnets that come with the tube.

As with anything you will get a diminishing return if you start ganging up a large number of magnets – the mass of the magnets will overcome the eddy currents.

Oh – in case you were wondering, here are just two industrial uses for eddy currents: Brakes on trains and other very large vehicles (big copper disks and electromagnets) and pipe testing (run electromagnet inside the pipe, measure the force produced in the pipe – less force = thinner walls).

Some years ago, we got a sheet of shiny green material in the office. Turns out it was sensitive to magnetic fields (it would change appearance if you passed a magnet over it). It develops that, what became known as our Magnetic Field Viewing Film, is a multi-layer material, one of which is composed of countless tiny bubbles filled with a green gel-like material. Suspended in that gel are flat flakes of nickel. The color change you can see is created by the changing orientation of the flake – flat to your eye, they are more light reflective, and thus lighter in color – perpendicular to the eye, they are less reflective, and thus appear to be darker.

We were siting around a table looking at this material and making it display all kinds of interesting magnetic field patterns, when I got an idea – “What would happen if we wrapped this stuff around an eddy current tube?” The others laughed at me – “nothing – -the field will not be strong enough.” I was not about to take that without at least checking – and, lo and behold, one of the coolest demos ever was born.

It turns out the field is VERY visible with the material. It has been likened to X-Ray vision, as you almost seem to be able to see the magnet through the solid metal of the tube. Perhaps the most interesting version of that is to use the longer Aluminum tube in conjunction with one of our M-190 large spherical neo magnets. Hold the tube at a 45 degree angle and allow the magnet to roll through it. You can then easily observe the poles of the magnet flip over as the magnet rolls on through the tube – naturally slowed by the same eddy current effect we have come to know and love.

I suppose you can tell that I really love these things. Lots more can be said – but I am not a physicist, so I will leave the deeper darker science to them. In the meantime, if you get a chance, grab one of these things, and be prepared to be amazed…

This entry was posted on Sunday, December 8th, 2013 at 2:31 pm and is filed under High School level, magnetism, Physics. You can follow any responses to this entry through the RSS 2.0 feed. You can leave a response, or trackback from your own site.