Demonstrating Density: Who Knew They Could Be So Dense?

Density is not typically an easy concept for most middle school students and even more difficult for younger students, but it doesn’t need to be.  We all know that D=m/V, but the easiest way I found to explain it to my students was to have them visualize a common dilemma in my home immediately preceding a vacation.  For years, as a poor starving teacher, I only had one suitcase, and it was actually a hand-me-down from my mother.  It was a medium sized Samsonite, hard cased piece of luggage.  When approaching the topic of density in my classroom, down from the attic it came.

My explanation began with an imaginary week-long summer vacation to a low-key resort.  The class and I would brainstorm the items I needed to pack for my trip.  Generally, the list included items such as a few bathing suits, shorts, t-shirts, a pair of flip flops, some PJs, underwear and a few toiletries.  It was obvious by looking at the size of my suitcase that in addition to my meager belongings, I could have probably also fit one of my students in my bag…  ok, perhaps one of the smaller kids.

I explained that when I closed the suitcase, it was hard to see, simply by looking at it, how heavy it was.  The lesson didn’t stop there.  We now planned my one-week ski vacation to Vermont during the February break.  Once again, my students and I made up my pack list.  The list included a couple of heavy sweaters, long johns, gloves, a hat, boots… as you can imagine, the list went on and on.  The question was, where to put it all.  Of course, since I had only one suitcase, the answer was easy.

I would explain that the night before my winter trips, I could usually be found sitting on top of my very over-stuffed suitcase trying to close the latches!  I was always a little concerned that if the latch broke, my suitcase would explode and my belongings would be everywhere!  That always elicited a round of giggles as my kids visualized that catastrophe!  The interesting point was that once my suitcase was closed and latched, there was no way to determine how heavy it was just by looking at it.  Here it is… density in a suitcase!

The volume or size of my hard-sided suitcase never changed; however, the mass, or all the stuff inside each suitcase I packed was dramatically different.  This is when we started explaining more of the science of density.  The more tightly packed the molecules in an object are, the denser it is.

My next prop included two identical cardboard boxes.  The first had about eight bricks inside and the second was empty.  Without telling my class what to expect, I would ask

for a volunteer to lift the box with the bricks.  After a bit of a struggle, the box would slowly rise above the table.  The other students could clearly see that the box was obviously very heavy.  I would then ask the same student to lift the second box.  Without fail, this box was hoisted so high that it almost flew out of the student’s hands!  Once again, we had two objects with basically the same volume but with drastically different masses.

My next question was: suppose my boxes were waterproof?  If I dropped them into the ocean, what would happen?  School aged kids all understand the concept of floating and sinking, so the obvious answer was that the box with the bricks would sink while the empty box would float.  I would explain that the bricks are denser than water, and that is why they sink. The air that filled the lighter box was less dense than the water, however, and therefore it would float.

In the next demonstration, I found two stainless steel spheres from Educational Innovations.  One was small and solid and the other one was much larger and hollow.  I would pass these around the classroom and asked the students to tell me which one had more mass (or was heavier).  Another unanimous answer:  the small, solid sphere was heavier.

Next, I would find another volunteer and blindfold my victim… I mean, my student.  I would then take two identical baskets, paper plates, or small plastic bowls and put each sphere in so they didn’t roll around.  I would ask my student to hold out his or her hands and would then place one plate in each hand and ask which was heavier…  Since both spheres are basically the same mass, the answer did not come as quickly as it did before the mass was spread out along a greater distance.  This was a perfect segue into the next unit on pressure.  But that would have to wait a week or two…

Of course, the observers in class were chomping at the bit to try the blindfold test.  Talk about active learning and a discrepant event!  Now that the class believed that both spheres were the same mass, I pulled out the large glass bowl filled with water, and I would ask my students to predict, based on the fact that we know that both sphere have the same mass, what would happen when I placed each sphere into the water.

This was amazing because, had I asked prior to blindfolding them, every student would have accurately predicted that the small sphere would sink, and the large one would float.  Now, a heated discussion usually ensued.  At this point, the mathematical formula was revealed (D=m/V).  When the mass increases and the volume remains the same, like the example of my luggage or the boxes with the bricks, the density increases.  At the same time, when the mass remains the same but the volume increases (like the small sphere vs. the large one) the density decreases.  Depending on the grade level I was working with. I would substitute simple numbers in the equation to show how changing the mass and volume affected the density. 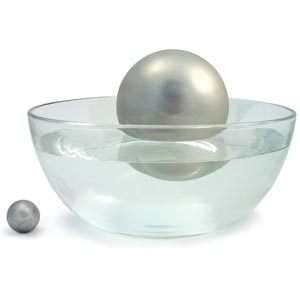 Now, back to the discussion of floating and sinking spheres… After the explanation of how volume and mass affect density, most, if not all of my students agreed that the small sphere, being very dense, would sink, while the larger, lighter sphere would float.  Another successful seventh grade lesson!

This entry was posted on Tuesday, January 3rd, 2012 at 5:59 pm and is filed under density, Elementary level, experiments, Middle School level. You can follow any responses to this entry through the RSS 2.0 feed. You can leave a response, or trackback from your own site.

7 Responses to Demonstrating Density: Who Knew They Could Be So Dense?