The Law of Dulong and Petit

Atoms were proposed in antiquity without any experimental evidence by Democritus, a Philosopher.  This must have been a problem for Newton and Leibnitz who posited that there was always a mean of considering smaller and smaller intervals of space to calculate the “instantaneous velocity”.

The introduction of the precision balance in chemistry by Lavoisier paved the way for Dalton to formulate his laws on the “definite and multiple proportions” governing chemical reactions.  This supported the atomic theory, without giving it general acceptance.

Specific heat was defined as the quantity of heat needed to increase one gram of a substance by one degree.  There was no definite pattern when specific heats of various substances were compared.  Until two French scientists in 1819 calculated specific heat by atomic mass, forming the Law of Dulong and Petit.  There appeared a number of cases where the results were quite similar: about 6 calorie per mole.  This was equivalent to stating that any atom is as good as any other to store heat!  This was a small step towards acceptance of the existence of atoms.   An explanation for this, and the reason for the exceptions, had to wait the early 20th century explanation by Albert Einstein.  By that time, atoms had gained wide acceptance from the work of Rutherford, and soon by Bohr.

Lesson on the Law of Dulong and Petit: 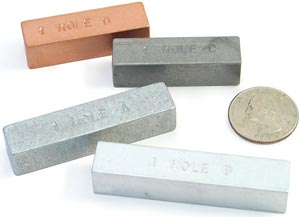 You are given several chunks of metal, each containing 0.6 * 1024 atoms (i.e. one mole) of one element.   How will each of those samples, when dropped in a standard quantity of hot water (typically 200 mL and 70 C) affect the temperature?

Step 1.  Use a good balance (at least 0.1 gm resolution) to determine which element you are dealing with.  If possible confirm your identification with an additional cue.

Step 2. Select one of the computers available, and look at the readings of the two temperature probes (lower left corner of the screen).  They will tell which pair of element your are assigned to investigate.

Step 3.  Prepare your two standardized water containers.  Fill the two Styrofoam cups with equal amount of tap water. Check that the two temperature sensors read the same within 0.1 C.   Then bring the two cups to the microwave oven and heat for 2 minutes.  Exchange the positions of the cups in the microwave oven and repeat another 2 minutes of heating (this will uniformize the temperatures).

Carefully bring back the two cups (the water may be very hot) to your station and insert the temperature probes into their respective cup.  You need to note which cup is to receive the required element (Gold => Yellow and Silver => Grey for example).   When the probes reach an equilibrium, after 5 to10 seconds, verify that the two temperatures match within a degree or less.  If necessary, use a 60 mL syringe to transfer water from one cup to the other and then the other way.  The idea is to have the same quantity of water at the same temperature within reason.

Step 4.  Start the measurement.  Hit the “START” button with the mouse and wait 10 to 15 seconds during which an horizontal line should appear, with both traces nearly on top of each other (if this is not so, go ahead anyway: you can always get another chance).

Drop your two samples the same time, one in each cup and watch until the completion of the three minutes.

Compare your results with the other teams’ and draw conclusions of the exercise.

This experiment on Dulong and Petit Law was performed by the students of Professor Shuffett’s Chemistry class at Lindsey Wilson College (Columbia, KY). It uses the mole set from Educational Innovations and takes advantage of existing data acquisition capabilities at that college.

About the Author:  After 20 years of research in Particle and Nuclear Physics, Dr. Oostens included in his activities, teaching at several college and universities all over the US. After moving to Kentucky 17 years ago, he co-founded a local Alliance, STASCKY (Science Teachers Alliance – South Central Kentucky).  He hasserved as STASCKY’s secretary since its inception.

For more than forty years he has kept a small research activity in collaboration with Los Alamos National Laboratory in New Mexico.  His involvement there started when Dr. Louis Rosen started a non-programmatic (i.e. not defense) group to attract more talents from all over the world. In 1970, he invited Dr. Oostens to participate in that project as the first non-American to work there. Dr. Louis’ idea was predicated on a high intensity 800 MeV accelerator called LAMPF (for Los Alamos Meson Proton Facility). Later on, the proton beam was used to create a flexible neutron source, LANSCE, that attracted a variety of researchers from all fields.

This entry was posted on Saturday, September 3rd, 2011 at 3:38 pm and is filed under Chemistry, College level, experiments, High School level, Physics. You can follow any responses to this entry through the RSS 2.0 feed. You can leave a response, or trackback from your own site.

One Response to The Law of Dulong and Petit