Bring Some Magic Into Your Classroom!

One of my favorite authors, Arthur C. Clark, once said, “Any sufficiently advanced technology is indistinguishable from magic.” This has been quoted, misquoted and reused for years.  Of course, it’s perfectly true, and magicians have been using science as part of their acts for centuries. Things that we take for granted today were once bleeding edge technology. I remember in high school reading that sometime ‘soon’ (this was more than 30 years ago) there would be TVs that would be so thin that they would hang on the wall like pictures – impossible! A generation before, the concept of television itself was astonishing, and a generation before that, moving pictures of any kind were magical.

As I started to think about this, I suddenly realized that there are many products that we sell here at Educational Innovations that are used – currently – by magicians as ‘tricks’ in their act. Let’s take a look….

Perhaps one of the most used and simplest items would be our Sodium Polyacrylate, which magicians know as ‘slush powder’ among other names. This hydrophilic long chain polymer relies on hydrogen bonding to bind with almost any water based liquid and create a gel-like mass, the volume of which is about the same as the liquid that you introduce. In simple terms, when almost any liquid comes in contact with this stuff, it almost instantly becomes a near solid. This is a quick and easy way for magicians to ‘vanish’ liquids in any number of tricks.

Magicians pay dearly to acquire this material, and yet it is readily available and used in many industrial applications. Perhaps the most widespread use is in disposable diapers. 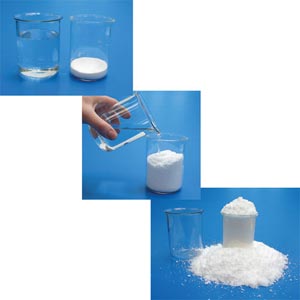 A close cousin of ‘regular’ Sodium Polyacrylate is what we know as ‘snow polymer’ or Instant Snow.  Actually this is chemically identical to ‘regular’ Sodium Polyacrylate, and shares its hydrophilic properties, but since it has a huge number of cross links compared to the original form, it expands massively, and quite quickly, producing a mass of fluffy white ‘flakes’ that resemble snow in look and feel. This material also finds its way into a variety of illusions.

I recently discovered that there is a product sold to magicians that is nearly identical to the Amazing Ice Melting Blocks. In the trick, the magician tells the audience that both blocks are identical (of course they aren’t), and that he will heat one block by bombarding it with his ‘psychic waves’ and cause the ice to melt. Magicians LOVE the fact that is uses real ice – in fact they can get it from audience members thus proving that it is real. The ice is placed on the blocks, and he concentrates oh-so-hard, and low and behold, the designated block melts the ice, and the ‘control’ block’s ice stays nicely whole…Presto!

Well — Thermodynamics! Of course one block is an insulator, and the other a conductor (plastic and aluminum in our version) that look practically identical. Heat transfer in the aluminum block ‘magically’ melts the ice, and the insulator preserves it.

In the classroom, this can be taken a step further: Allow the students to handle the blocks, and predict which one will melt the ice more quickly. Of course the aluminum block feels colder than the plastic block (it’s drawing the heat away from their hand more quickly), and so more often than not they will predict that the ‘cold’ block will preserve the ice. The look of amazement on their faces as the ice vanishes into a puddle in seconds is priceless (be sure to watch the video for the product).

Here’s something that I think is amazingly cool – a wire that, no matter how misshapen, when heated will instantly spring back to straight. It’s Nitinol Wire, a sophisticated alloy of Nickel and Titanium that falls into a special class of materials called shape memory alloys. These can be set into new shapes using a jig to hold the wire in a specific shape, and then heat-treating it. Magicians use pre-set shapes (often in the shapes of the suits on a deck of cards) which can be shown straight, and only went placed into warm water or exposed to the heat of a lighter, do they “magically” spring back into their pre-set heart, club, etc. incarnation.

You can make your own shapes, and of course you can do the reverse – bend the wire into the shape of a rival school’s mascot, or their letter, and obliterate it with a quick dip into a cup of warm tap water, leaving the wire straight once more.

As anyone who knows me will tell you, one of my two favorite products at Educational Innovations is the large Eddy Current tubes (the other is our Chinese Spouting Bowl).  The magicians have grabbed on to this physics concept as well, with products such as “Newton’s Nightmare’ and others.

“Newton’s Nightmare” consists of an aluminum tube with a series of holes down one side, a magnet, and a non-magnetic mass identical in appearance to the magnet. Using slight of hand, the magician can control which mass the audience member drops down the tube, and by doing so he can ensure that his will always take several seconds, and the audience member’s mass will drop just as you would expect it to – instantly. How does that work? Amazing!

A complete understanding of how eddy current tubes work is fairly complex, but in the simplest terms: Lenz’s law states that a magnet passing through a coil will produce an electric current. An eddy current tube can be made from any non-ferrous, electrically conductive material that acts as the ‘coil’.  As a magnet passes through the tube it creates the aforementioned electric current, and that, in turn, creates an electromagnetic field. The interaction of that electromagnetic field and the field of the permanent magnet cause the magnet to drop through the tube at a greatly reduced speed as compared to the effect of gravity.

In the Large Copper tube (ED-100), the walls are quite thick, which allows us to use a smaller magnet. The advantage to this is that when you look down the tube, you can see ‘daylight’ all the way around the magnet as it falls slowly through the tube. Use a tighter fitting, more powerful magnet like our M-165, and the drop time more than doubles. Educational Innovations also has Eddy Current tubes in aluminum, and small, thinner walled copper tubes, one of which has a slit in it so you can see the magnet fall. There is even a monster one meter copper tube that comes with magnets yielding a drop time of over 25 seconds!

Hey, I understand how the thing works, but it STILL seems like magic to me!

This entry was posted on Saturday, July 10th, 2010 at 5:05 pm and is filed under Chemistry, College level, Elementary level, experiments, High School level, Middle School level, Physics. You can follow any responses to this entry through the RSS 2.0 feed. You can leave a response, or trackback from your own site.