Who knew that a single coin could be used for so many classroom science activities!  You can demonstrate concepts such as surface tension, buoyancy, and even eddy currents with Japanese yen coins!

Surface Tension: Even though aluminum has a density of 2.7 gm/cm3, and the density of water is 1 g/cm3, aluminum yen coins can float on the surface of the water!

Using a bent paper clip or a plastic fork, gently lower the flat side of the coin onto the surface of a pan or cup of water and remove the clip or fork. The coin should rest on the surface of the water. Plastic cups, glass bowls or baking dishes 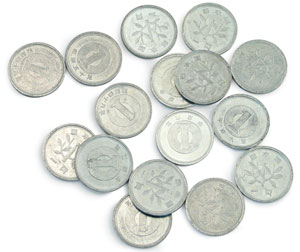 with clear sides will make it easy to see the effects of surface tension. The coin will actually slightly depress the surface of the water and can easily be viewed through the side of the dish or pan.

Adding more than one coin to the pan will result in a cluster of coins forming. Since each coin depresses the surface of the water, they will tend to slowly float together and form a regular, crystalline structure. (Imagine bowling balls on a stretched bed sheet – they will slowly roll towards each other to form the most stable structure.)

Adding a few drops of soap, such as dish detergent, will break up the surface tension of the water and cause the coins to sink.

Another great surface tension experiment you can conduct with your students is to have them initially predict the number of drops of water they can fit on the face of the yen.  Then, using a pipet, have

students drop water, one drop at a time, onto the face of the coin.  They will be amazed at how many drops this small coin will hold.  This activity is perfect for discussing variables that could change the results of the experiment as a result of the experimenter’s manipulation (independent variables) .  Students can brainstorm reasons that some coins held more drops of water than another.  Examples include the side of the coin that is used, how worn the coin is, and how high above the coin the water is dropped from the pipet.  Controlling as many of these variables as possible, gives the most accurate results.

Other Demonstrations with Japanese Yen Coins:

Eddy Currents: For this demonstration, you will need a strong magnet, such as one of Educational Innovations’ neodymium magnets. First, demonstrate that the yen coin is not

There are so many uses for this small aluminum coin in every science classroom.  You can get yours at Educational Innovations for only $7.95 for a package of 50 yen coins!

This entry was posted on Wednesday, February 24th, 2010 at 8:14 pm and is filed under Chemistry, Elementary level, experiments, Middle School level. You can follow any responses to this entry through the RSS 2.0 feed. You can leave a response, or trackback from your own site.

One Response to Science Experiments With Japanese Yen Coins